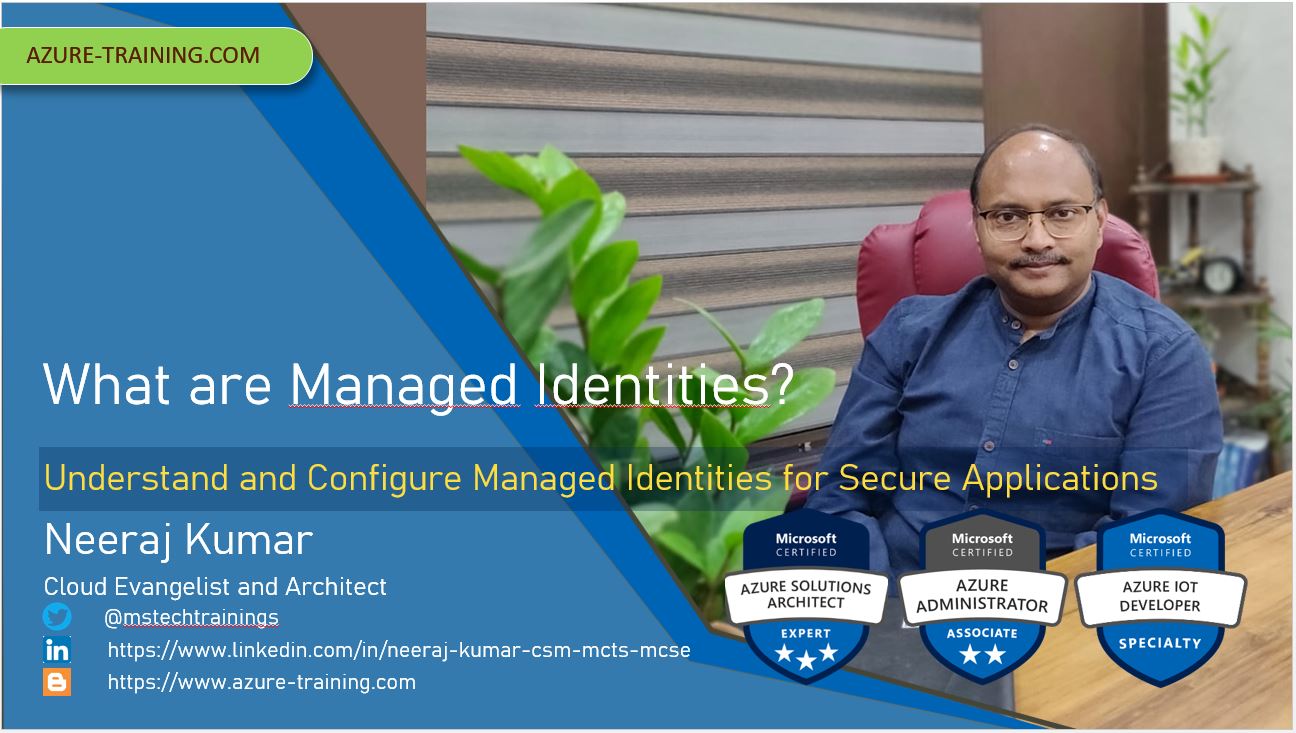 By the end of this course, you will have a solid understanding on Managed Identities and will be comfortable to use managed identities to keep your application code free from credentials and other secrets, while working with other instances of Azure services that rely on the Azure AD authentication and role-based access control.

Setting up the Stage

It is better to understand the managed identities with an example. Consider there is an organization CloudNext, which has a B-2-B business model having multiple partners. The IT department at CloudNext is planning on building a secure internet application on Azure to have an online presence in order to ease up and to expand their areas and regions of business.

The security team discovers that the passwords and other connection string secrets are stored in the configuration file within the application itself and in some other places within the code. Security team, therefore, raises a red flag and refuses to approve the deployment of the application to the production stating security reasons, which obviously is the right thing. This must have been planned.

This was a clear miss and the team indeed needed to think through the alternate solution on how they can remove the secrets and credentials from within the application and still be able to securely connect to other Azure services and database to be used.

They start to lookout for any feature in Azure that could help them resolve their problem. This is when they come to know about Azure Key Vault. They were happy as all the application secrets and credentials could be stored and managed within the key vault and it can be accessed from inside the application to connect to other Azure services and database.

The development team at CloudNext discovers that they can get away with the credentials and secrets stored within their code and instead leverage managed identities to  overcome such security issues. The development team now makes all the changes, removes all the stored credentials and passwords, and uses managed identities with Azure Key Vault. The application is again reviewed by the security team and this time everyone is happy and the security team blesses the application and gives a go-ahead for the application to be deployed onto production so that CloudNext Partners could easily and securely access the application.

Managed Identities are really very powerful as it levitates you from managing those identities and other overheads associated with credential management. The code remains clean and the Azure Key Vault can now be accessed without maintaining any configurations for the key vault within the code. Not just that, as I already mentioned, other Azure resources that support Azure AD authentication can now be accessed without having to store there connection string or other secret keys. For example – the application code can now access SQL database via the Key Vault or directly as it supports Azure AD authentication.

Types of Managed Identities and their differences

These managed identities are of two types:

System-assigned Some Azure services allow you to enable a managed identity directly on a service instance. When you enable a system-assigned managed identity an identity is created in Azure AD that is tied to the lifecycle of that service instance. So when the resource is deleted, Azure automatically deletes the identity for you. By design, only that Azure resource can use this identity to request tokens from Azure AD.

Managed identities for Azure resources is the new name for the service formerly known as Managed Service Identity (MSI).

So, what benefits do you get when using managed identities?

2 thoughts on “What are Managed Identities for Azure Resources?”